Mandolin Technique – Down Stroke and Up Stroke –…

Basic Movement of the Hand

This is an exercise for learning the right movement of the hand:

Lay your forearm and hand onto a desk. You can use a book to raise your forearm a little bit, which produces an even more relaxed position of the hand.

This movement is a bit unusual at the beginning, so this exercise is a way to practice the movement from the wrist.

You can also make this exercise without a table. Just hold your right forearm with your left hand, and move your right hand from the wrist to the left and right.

This movement will be used to play the mandolin.

Many of the old mandolin methods start from the beginning with the tremolo or the up- and down movement. I think this is a good way to lear the picking movement. If you just play downstrokes like in the modern German methods the hand has to do an up movement anyway between two down strokes. I think that it is important, that the movement of the hand is done in the right way from the beginning.

Downstroke: The hand moves on straight line from a distance above the strings, diving through the plane of the strings in directon of the mandolin table. The pick hits a string and moves on until it is stopped by the next string. The taget of your movement shold be the stopping string, not the string that you actually play. After the picking movement tha hand should rest with its weight on the next string until it moves again for an upstroke or the next downstroke.

Upstroke: The hand moves back on the same straight line, away from the mandolin table. While the hand moves up it will hit the lower string again, caused by the slanted movement only one string of the double strings is hit. The movement continues until it reaches the place for a new downstroke.

In my opinion it is good to make large movements in the beginning. This will make it easier to control the right movement. And it will produce a loud and clear sound. As soon as you play faster the movements will get smaller.

If you try to make small movements you will not be able to produce a loud and clear sound with your mandolin.

The movement for the down- and upstrokes should be similar to what I described above. The movement should come from the wrist. In my opinion this straight movement up and down, along a slanted line, with a downstroke hitting (and resting) on the next string, and a big upstroke is the basic movement on the mandolin.

You can find a detailed description of the movement in the first volume of the mandolin method by Zarh M. Bickford, which is available as a free download at the internet archive. Here are the most important descriptions from the Bickford Method:

In other words – from Paramount Method for Tenor Banjo by WM. Foden copyright 1922 (also available in the internet archive) 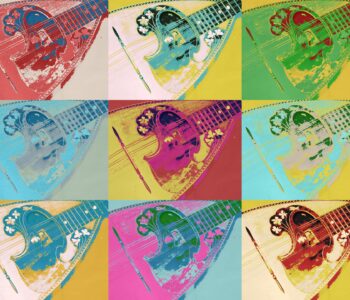