Yesterday I have found an article about the group MANdolinMAN, a mandolin quartet from Belgium in the German Wasser-Prawda blog, which presented their second CD with Brazilian music:

I was very curious and searched for the website of this group, where I have found previews of the new CD as well as examples of their first CD. I have also found the following videos showing MANdolinMAN:

As you can see in the videos, the band typically plays with three mandolins and a mandocello or with two mandolins, mandola and mandocello. The sound reminds me a little bit to the music played by Patrick Vaillant and his quartet. In the first video a tune from the Brazilian CD can be heard, the second video contains examples from the first CD with traditional music from Flanders.

The band has just returned from a tout to Brazil.  You can find some fotos on the facebook page of MANdolinMAN.

Just like Alan Lomax followed in his father’s footsteps, Hubert’s son Andries Boone (Leuven, °1977) started the MANdolinMAN project, in order to bring his father’s notations to life. He does so in a very distinct way, together with three kindred spirits: mandolinists Peter-Jan Daems, Dirk Naessens and Maarten Decombel. Being played on a very well-known instrument as the mandolin, the ‘local’ melodies (from Eppegem, Hever, Zaventem, Elewijt …) become timeless and universal. Even, a trained ear will find it difficult to locate some of the origins. Echoes of Appalachia? Northumbrian sprightliness? Melancholy from Lisbon? Cape Verdean elegance? No, nothing like that: the wonderful instrumental music of MANdolinMAN stems from Flanders and its environs. I can’t imagine a more fitting tribute to Hubert Boone and his work.”

Review FolkWorld: Dusting Down the Tunes

“I contacted the musicians to come and participate in the project. I knew them because Belgium is, shall we say, very small! I chose the tunes and it sounded so nice playing them together that we were convinced to go for it. To be honest the record’s first main goal was a surprise for my father’s 70 birthday! It started as a one off gig and CD. But the story went its own way. Today it has become an international story.”

Andries fills me in on the MANdolinMAN quartet’s personnel. “Dirk Naessens is mostly known from playing with Urban Trad. Maarten Decombel is known from his solo work and of course from the folk bands Snaarmaarwaar and Naragonia Quartet. Peter-Jan Daems played with Snaarmaarwaar untill January 2013. They all have clocked up an impressive service in folk music. Maarten is also one of the best guitar players in Flanders. Dirk received a ‘government medal’ on fiddle at the Brussels conservatory and played with many excellent bands in Belgium, though Urban Trad was the best known.” 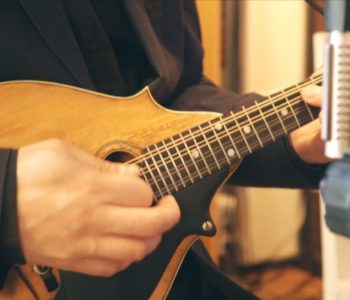