Some time ago I read about two players with a handicap who despite this have become professional players in a band.

Jarred has been playing the violin since he was seven, and has taken it upon himself to learn other instruments including the mandolin and guitar. For 9 years, Jarred was involved with the Calgary Fiddler’s Association, which is a group of 15 young violinists who perform up to 100 times per year in and around Calgary.

Jarred has a deformed right hand, but he learned to play the fiddle, the mandolin and the guitar despite this. In the following video you can see Jarred Albright with all the three instruments.

A second video shows Jarred Albright with the Calgary Fiddlers. In this piece he plays the mandolin and you can hear some powerfull bluegrass fills that he plays.

Barry Abernathy is the banjo player of Mountain Heart, a progressive and successful bluegrass band. On the Mountain Heart homepage you can find some information about his biography:

Winner of 1997’s Banjo Player of the Year award from the Society for the Preservation of Blue Grass Music in America, Barry began his musical career performing bluegrass gospel with Silver Creek, but first came to national attention as a member of one of the decade’s hottest bluegrass bands, IIIrd Tyme Out. From 1994 to 1998, the Georgia-born banjo player/lead vocalist was a featured member of Doyle Lawson & Quicksilver, recording five albums with the award-winning ensemble before leaving to form Mountain Heart.

Barry Abernathy has learned to play the banjo in the typical bluegrass style although on his left hand he has only a thumb and a bit of the index finger. It is almost incredible to see what Abernathy can do with this deformed left hand. You can read more about Barry Abernathy in the following article:

Some excerpts from this article:

“I got to noticing it’s an open-tuned instrument,” he said of the banjo, which typically is tuned to an open G chord, which means there are more open strings available, and not as much left-hand work is required to get at least the basics together.

He gravitated toward local banjo players, getting them to show him their licks. Then he would figure out how to do it in his own way.

“It started with just wanting to learn the melody to simple songs, songs I did in church and songs that I’d heard growing up,” Abernathy said. “Then it went to trying to figure out some of the Earl Scruggs stuff.”

You can see Barry Abernathy playing his banjo in the following videos:

The next video shows the performance of a great song by Mountain Heart. Barry does not have to play very much in this song, but I had to include this great song – I must listen to more Mountain Heart!

The next video shows Barry Abernathy with Doyle Lawson in a typical bluegrass song: 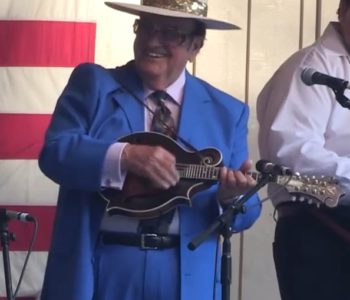